Smoke was rising from campfires in Yosemite Valley when the Joseph Walker party looked down from the north rim in 1833. The first non-natives to see the valley, they were exploring routes across the Sierra Nevadas. Whether because of the sheer, 3,000-foot drop or fear of the firemakers, Walker decided to ride on. It was nearly two decades later before Euro-Americans set foot in the valley for the first time, an arrival that was not fortuitous for the inhabitants. 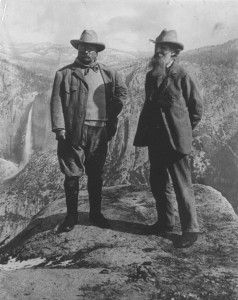 President Teddy Roosevelt and environmentalist John Muir on a camping trip in Yosemite in 1903. Bully! See live presentations of “The Spirit of John Muir” in the Yosemite Theater.

First People in the Valley

In the 1800s, the Miwok tribe living there referred to themselves as the Ahwahneechee and to their valley as “Ahwahnee,” which means “the place of the gaping mouth” or “deep, grassy valley.” Living in cedar bark teepees, they harvested acorns in the black oak woodlands and piñon nuts in the high country. They hunted for deer, waterfowl, and rabbits, and fished for trout in the Merced River canyon, climbed into the eastern mountains and traded their fine baskets with the Mono Lake Paiutes.

Around 1850 when gold miners began to invade their homelands, the Miwoks retaliated by robbing settlements and a trading post, prompting miners to put together the Mariposa Battalion, which attacked the tribe with guns and horses. They captured the chief, Tenaya, killed some of his people and rounded up the rest, moving them to the Central Valley––some of the captives fled east to the Mono Lake area and a few hid in the valley, only to be chased out.

The soldiers told tales of the spectacular geological sights and waterfalls they had seen, and by 1855, the first tourists rode into the valley on horseback, led by an English-born gold-seeker, James Mason Hutchings. Entranced more with Yosemite than with the hard life of mining, he wrote of the place in his own Hutchings’ Illustrated California Magazine, and he built three drafty, barnlike hotels at what is today the Yosemite Chapel parking area.

Classic Yosemite Valley Tour
A must for first-timers, the 2-hour, year-round, ranger-led Yosemite Valley Tour stops at the most famous sites in the park, with narration of history, geology, plant and animal life. Open-air trams from late spring through early fall; and from late October through April, enclosed and heated motor coaches with large windows. Bring your camera for those world-famous views –– Yosemite Falls, Half Dome, El Capitan, Tunnel View, Bridalveil Falls and more. (Spanish language available.) Always make reservations or purchase tickets in advance.

About the same time, a homesteader in the Wawona area, Galen Clark, explored what is now the Mariposa Grove of Giant Sequoias, and began a crusade to protect them and the valley from loggers, cattlemen, sheepherders and settlers, all of whom were making claims on the land. Yosemite became famous due to Clark’s lobbying and from the early photographs, sketches and paintings made by artists who accompanied groups of tourists, explorers and the U.S. Army.

Another early visitor, Thomas Starr King, a Unitarian minister, described Yosemite in the Boston Evening Transcript, in an article that was read by President Lincoln. In the midst of the Civil War in 1864, Lincoln signed the Yosemite Grant, which drew the Mariposa Grove and Yosemite Valley under the protection of the state, the first time any government in the world had set aside land based solely on its unique natural splendors, paving the way for American national parks.

In 1875, a jolting, two-day stagecoach or horseback journey over corkscrew dirt roads brought visitors into Yosemite from train depots in the Central Valley, and when they arrived, they stayed a while. The Clark brothers opened the Wawona Hotel, the first resort hotel in California, to accommodate travelers on their way to the valley. When the intrepid tourists got their first views from the Wawona Road of the granite monoliths and towering spires, and descended on the bumpy, dusty byway to the refreshment of the river and the dazzling waterfalls, they were as breathless in their amazement as we are today. As Ralph Waldo Emerson said, “ . . . this valley is the only place that comes up to the brag and exceeds it.” 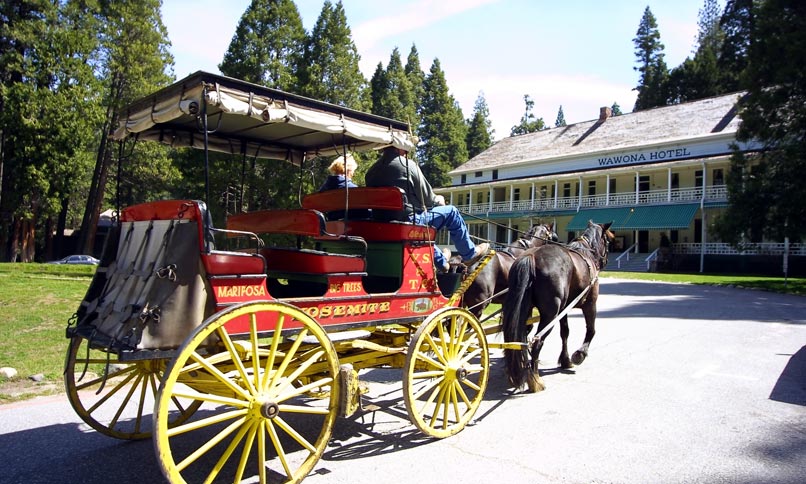 The first resort hotel in California, the Wawona Hotel opened in Yosemite in 1865

President Theodore Roosevelt slept at the Wawona Hotel (now called Big Trees Lodge), as did Diamond Jim Brady, William Jennings Bryan, and many other notables of the 19th century. Riding above Wawona Meadow like an aging, yet still glistening, white ocean liner, the oldest resort hotel in California was built in 1865 and is in fabulous shape. In an enchanted forest setting are several white, Victorian-style buildings with wrap-around verandahs; plus a small swimming pool, sweeping lawns, a 9-hole golf course, and the Merced River nearby for swimming and fishing.

Just sink into a rocker on the covered porch; and in the wintertime, bundle up with a hotel-provided wrap while you enjoy the snowy scene. Evenings by the fireplace in the lobby are sweet, while a pianist plays and spins tales of old Yosemite.

By the 1880s, although only about 2,500 people were touring Yosemite annually, tourism was making its mark. One example was the hollowing out of a massive, centuries-old sequoia in the Mariposa Grove to create the Wawona Tunnel Tree, wide enough for a horse and wagon, and later autos, to ride through. In the mid-1890s, the last grizzly bear was shot in Yosemite. Pioneers erected cabins, and the wildflowery meadows that are so carefully preserved now were trampled, burned, dug up and plowed under. (To be continued: click here for Part Two of Yosemite History and Tours.)

The best-known artist associated with Yosemite is the landscape photographer, Ansel Adams, who photographed this and other national parks for over sixty years, creating such classic images as “Moon and Half Dome” and “Clearing Winter Storm.” He received the Presidential Medal of Freedom, and Mount Ansel Adams and Ansel Adams Wilderness were named for him. He lived for years in the park and began the tradition of teaching photography here, which continues today at the Ansel Adams Gallery, where you’ll find a charming collection of photos of Adams, from childhood through his Yosemite years; and, original, signed photos of his and those of other fine photographers.

With advance reservation, you can take the 4-hour “In the Footsteps of Ansel Adams,” a field trip to locations where Adams composed some of his most famous images. Looking at your images through your lens, you will receive insight into his life, photography and philosophies, as well as basic lessons in photographic technique.

Free 1-hour Camera Walks are conducted several times a week, year-round, weather permitting (as with all of the Yosemite tours and many events, make advance reservations).

Fine Print Tours (most Saturdays) are an hour with a gallery curator viewing some of Ansel Adams’ original photos. Discussion of the evolution of photography and his personal artistic history.