A snowy winter weekend in Québec that I’m hoping will inspire you to plan a winter holiday in Canada’s second oldest city—founded in 1608, and still a charmer after all these years! (An easy way to get there is to fly into Montreal and take the train—a very comfortable and scenic 3-hour ride.)

Heading for a Christmas shopping trip in Québec City, my daughter and I gazed out of the train windows at the winter-gray St. Lawrence River sliding past, while a steady snowfall turned the dense woods and a procession of little villages into winter-white postcards. Three hours later, drowsy from the drone of the wheels, we disembarked and pulled our luggage through the station, the chateau-like Gare du Palais, and climbed into a taxi, setting off into a snowstorm.

Shivering in our California clothes, we peered out at the port area—le Vieux Porte—to see immense blocks of ice floating in the river. Our driver steered carefully through an archway in a massive stone wall, entering a maze of narrow, steep, icy cobblestone streets, and we wondered how, in the deep freeze of winter, we would find the fabled warm heart of this old French-Canadian city.

On this late afternoon, Québécois in fur-trimmed boots and with thick hats pulled over their ears tottered along the sidewalks, in and out of little shops through doorways framed in snow-frosted evergreen branches. We could see a couple in the glowing window of a café, leaning towards each other over steaming cups. Dodging some kids careening down the street on a sled, our taxi pulled up at the Fairmont Le Château Frontenac, built in 1893, an architectural icon defining the city skyline.

In the fading light, we looked up at the soaring, green copper rooftops topped by flags snapping in the wind. Lit up like a giant’s Christmas tree, the twelve-story tower, topped by snow-frosted dormers, fancy cornices and chimneys, glittered in the whirling blizzard as if in a snow globe.

Taking the advice of the bellman, we watched our luggage disappear into the elevator and hopped back into the same taxi, asking to be taken to Le Café Du Monde, a Parisian-style bistro overlooking the river. It’s amazing, isn’t it, how cozy you feel with a glass of Armagnac, hot water and lemon in your hands, and a garlicky bowl of moules mariniere avec frites on the table?

Thirty-something and fluent in French, and with the savvy gained from having spent time in Paris with a French boyfriend, Jessica read the menu: confit de canard (duck confit), poulet Rôtisseur (rotisserie-roasted chicken), bouillabaisse, crème brûlée­. Through the window we watched an icebreaker ship move between the slabs of ice on the St. Lawrence River.

Laying out our city map, we made plans to see the historic sights and do our Christmas shopping, snowstorm or no snowstorm. We marked the location of our hotel, the monumental Frontenac, on a high bluff called Cap Diamant at the top of Vieux-Québec, the “old town”. Rimming the upper cliffs is a seven-foot-thick wall bristling with cannons. Below lies the river and le Quartier Petit-Champlain (Lower Town), reached by the Escalier Casse-Cou (Breakneck Stairs) and thank goodness, also by a glass-enclosed funicular. Once a rough-and-tumble district of warehouses and wharfs, the narrow alleyways of the lower town are now chock-a-block with restaurants, cafes, shops and small inns.

Also in the old town, La Place Royale is the oldest shopping district on the continent, where boutiques, artisans’ ateliers and galleries, and restaurants are housed in 17th and 18th century stone buildings with huge chimneys and battalions of dormer windows. Dominating the Place-Royale is the steepled Notre-Dame-des-Victoires Church, the oldest stone church in North America, built in 1688.

A lively fur trading port in the 16th century, Québec was an outpost of France and much envied by the English. Vying for control of the colony, the English besieged the city, scaling high cliffs in a surprise attack in 1759. The invaders won, laying the foundation for today’s Canada. Nonetheless, having settled here in the 1600s, the French remained, never giving up their dream of New France nor the French spirit of their city, the queen of La Belle Province. Today, 95% of the residents are French-speaking, and they have carefully preserved 300 years of fanciful, French-influenced architecture, stone fortifications and quaint meandering neighborhoods. This is the only walled city in North America, and so authentic that UNESCO has designated it a World Heritage Site.

Pulling on hats and gloves, boots and mufflers on our first morning, we descended the Breakneck Stairs into the ancient heart of the city, le Petit-Champlain, which from our vantage point looked like one of the illuminated, snow-frosted villages you see under Christmas trees. To our delight, we found the pedestrian-only streets lined with decorated shops and inhabited by a lively gang of characters. We watched and listened to strolling, costumed carolers, a mischievous squad of mimes, twirling life-sized music boxes, and some rather rowdy angels on stilts. Accompanying Père Noel (Santa Claus), several elves pranced around, kidnapping little kids and taking them to forest glades sparkling with lights, while parents trailed along, taking photos.

All over town we heard about Le Grand Marche, the annual Christmas market, so after a bowl of potage at Café Le Saint-Malo, we trundled off in a snow flurry to Quai Saint-André in the Vieux Porte district, near the train station, and what a magical market it was. Under a canopy of little white lights, a line-up of booths was manned by farmers and artisans from the surrounding region—cheese makers, confectioners, patissiers, cider brewers, chocolatiers and other vendors selling their wares and offering samples—slices of cranberry pie, homemade confit, wild berry preserves and a dozens of types of maple products, from fudge to jugs of syrup, taffy, butters, tinned cookies and even maple liquers. Our arms were soon full of jars of honey and creamy goat-milk soap. We bought a wooden ship for a little boy we know, a thatched birdhouse, and some hand-loomed shawls and scarves. By the time we tasted pear brandy, ice wine, hard cider, and spicy spruce and birch beer, even I spoke a flowing, if not fluent, French.

Another day, in the upper town, we went to La Boutique de Noël, said to be the largest Christmas store in North America, where we browsed thousands of elaborate decorations, from imported glass snowflakes to the famous Radko-designed, Victorian-look ornaments, and Cirque du Soleil-inspired sunbursts and circus figures. Within the store is a permanent miniature village depicting Québec City of centuries past, comprised of nearly 300 porcelain buildings and over a thousand tiny figures.

At the Museum of French America we watched as costumed docents reenacted the history of the province, then we stopped to watch skaters on the outdoor ice rink on Place d’Youville at Porte St. Jean, one of the openings in the old granite and limestone walls. Stopping at a street kiosk, we managed to down a couple of hot brandy-laced toddies before taking a taxi tour of the grand, Louis XIV-style complex of Parliament buildings and a parade of boutique shops shimmering brightly along La Grand Allee and Rue Saint Jean.

Winter Fun after the Holidays

The Aquarium du Québec Sparkles: Illuminated by 500,000 LED lights, the outdoor pathways at the Québec City Aquarium are dazzling. For the whole family, Dec 26-Jan 5 and Jan 11-Feb 29.

The Ice Hotel: The grandiose Ice Hotel is the only one of its kind in North America, entirely built of ice, and is designed around a new theme every year. Starts January 2.

Ice Fishing in the Heart of the City: Village Nordik at the Port of Québec is the only place in the city center where you can go ice fishing in an inflatable igloo! Starts end of January.

On our last night, Jessica dined with newfound friends and stayed out late listening to live jazz at Bar Ste-Angele, a cozy pub in the Old City.

I bundled up and walked out of the hotel onto the Dufferin Terrace above the river and the lower town. Clear at last, the sky dazzled with stars while a full moon lit up the snowy rooftops and the gleaming, ice-filled river. Like mirages in the moonlight, a row of massive black cannons flanked a frosty statue of Samuel de Champlain, the French explorer who founded the original settlement here in 1608.

I retreated inside to 1608 Bar, a drinking (and cheese-tasting) establishment where Winston Churchill, they say, once tippled. The bartender convinced me to try a “caribou”, a traditional wintertime concoction of whiskey, red wine and maple syrup. He claimed that the early Huron Indians in these parts drank blood from their caribou kills, and the first settlers added wine to the blood to make the fortifying drink more palatable.

My caribou (just one, to avoid “mal de bloc”—a terrible headache) was indeed palatable, and warming, helping to assuage my tristesse about the end of our winter getaway. 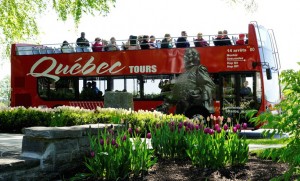 Click here for more about the history and heritage of Quebec City.

We’d love to hear about your experience in Quebec City or your wintertime adventures,
especially any tours that you recommend. Contact us here!

Kids and Families Discover the Mayan World at Hacienda Petac